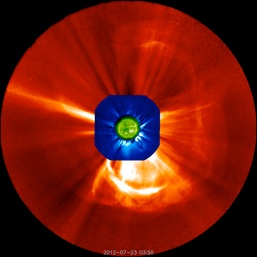 Solar coronal mass ejections (CMEs) are the source of the strongest disturbances of the Earth's magnetic field. Masses of the magnitude of a small terrestrial mountain are expelled from the solar corona attaining speeds of millions of kilometres per hour and expanding to sizes of a considerable fraction of the Sun-Earth distance. When their complex of plasma and magnetic fields hits Earth and if this fulfils certain properties, a part of their energy can be transferred to the Earth's magnetosphere. So called geomagnetic storms are elicited, which pose a great threat to our modern technological infrastructure, in particular to satellites in Earth orbit and to power grids on the ground. Thus forecasting these hurricanes of space weather is needed by an increasing amount of public and private institutions, in particular with regard to the upcoming solar maximum.

In the course of this research project, new observations by the NASA STEREO Mission will be analysed. STEREO is able to image Earth directed CMEs in white light at two vantage points far away from the Earth. Their density enhancements in the solar wind can now be followed for the first time stereo-scopically all the way from the Sun the Earth in white light. The same eruptions are then sampled by spacecraft (Wind, ACE) near Earth directly in situ in the solar wind.

Aim (1) of the project is to compare results from recently developed forecasting methods applied to the STEREO/HI images of CMEs to in situ observations of the same events at 1 AU.

Aim (2) is directed to the related question if and how the CMEs rotate during eruption and/or propagation using both observations and numerical simulations, which will be carried out for the best observed events studied for the first aim.

Results from this project can be taken as basic principles to enhance the reliability of space weather forecasting models, which are used to prolong the advance warning time for a potentially threatening solar eruption.

during the project's lifetime, the researcher Christian Möstl authored and co-authored

I found new results on the propagation, 3D structure and global appearance of solar storms (coronal mass ejections, CMEs) between the Sun and the Earth, with observations from multiple points in the solar wind. 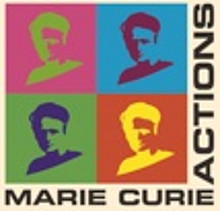