Stellar activity manifests itself in various phenomena, which can be observed in various wavelengths. The most energetic activity phenomena known from the Sun and stars are radiation outbursts (flares) and coronal mass ejections (CMEs). Both phenomena are well investigated on the Sun, even a strong correlation between flares and CMEs exists on a temporal and spatial scale for energetic flares and CMEs on the Sun.

Both phenomena are also known from stars. Stellar flares have been recognized as early as the 1920s, but the term "flare star" was established when the dM star UV Ceti showed huge increases in brightness. Since then a large number of flares were observed on many stars from X-rays to the radio regime. In contrast to stellar flares, stellar CMEs have been detected only on few stars. The main reason for this circumstance is that flares are easier to detect. Flares are detected in light-curves obtained from photometric time series. 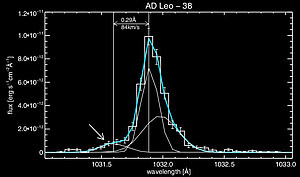 Stellar CMEs can be detected via different methods. Either one uses the direct signature of moving plasma, namely the Doppler shifted emission or absorption (see Fig. 1), or one uses phenomena which are related to CMEs, as known from the Sun, such as radio bursts or X-ray dimmings. Because parameters of stellar CMEs are not well known, we focus on the determination of frequency, velocity, and mass of stellar CMEs, in dependence of spectral type and age, via the methods mentioned above. Knowledge on the characteristics of stellar CMEs is needed to answer the question to which extent stellar CMEs play a role in stellar mass and angular momentum loss aside from the stellar wind. Moreover, parameters of stellar mass ejections are needed to properly model the influence of stellar activity on exo-planetary atmospheres, as it has been shown that CMEs, together with a high short-wavelength radiation environment, may erode the atmospheres of close-in orbiting exo-planets.

We use optical spectroscopic observations from the European Southern Observatory (ESO), the Nordic Optical Telescope (NOT), the 2 m Schmidt telescope of the Thüringer Landessternwarte (TLS), and the Observatory Lustbühel Graz (OLG) of the University of Graz. For the search for radio bursts related to CMEs we use spectral radio observations from the Ukrainian T-shaped Radiotelescope-second modification (UTR-2) hosted by the Ukrainian Academy of Sciences and the Giant Meterwave Radiotelescope (GMRT) hosted by the National Centre for Radio Astrophysics in India.