This has been the question which could now be answered in a recent publication in ACS Nano with the help of theoretical predictions from the group of Peter Puschnig.

Aromatic molecules (from the greek work for “good smell”) are planar hydrocarbons, where the delocalization of electrons leads to an energetic stabilization, which leads to fundamental changes in the  molecular properties such as an equalization of bond lengths or diamagnetic ring currents. The  prime example for an aromatic molecule is the ring molecule benzene (C6H6), whose chemical structure has been clarified by August Kekulé already in 1865. The “superring” molecule keukulene, C48H24 (Figure A), named after him, has been the subject of the current publication. The central question was whether kekulene shows “superaromatic” properties in analogy to benzene.

Although the first syntheses of kekulene already dates back to 1978, the current experiments have only become possible through a novel chemical synthesis route, which has been developed by our project partners from the University of Marburg in Germany. By evaporating precursor molecules onto a copper substrate and suaequent annealing of the sample at 500 K, a well-ordered monolayer of kekulene could be prepared which has been conformed in high-resolution images from s scanning tunneling microscope (Figure B). Project partners from the Forschungszentrum Jülich and the University of Graz have then performed photoemission experiments using a technique, which has become known as photoemission tomography and which has been pioneered about 10 years ago at the Institute of Physics of the University of Graz. Using ultra-violet radiation from the synchrotron of the PTB Berlin, the angular distribution of electrons, which have been excited from the frontier molecular orbitals, have been measured. A comparison of the so-obtained momentum distribution of the emitted electrons (Figure C) with a theoretical prediction (Figure D) allows for far-reaching conclusions about the properties of the electron system in the molecule. In particular, the comparison demonstrates that kekulene is not “superaromatic” but rather aromatic rings and double bonds are alternating. Our results not only clarify the electronic structure of kekulene, but are also evidence for the fact that photoemission tomography in general can be utilized to investigate the aromaticity of other organic molecules in future studies.

This work is part of the DACH-project “Exploring the foundations of photoemission tomography” coordinated by Peter Puschnig and financed by the Austrian Science Fund (FWF).

link to publication in ACS Nano 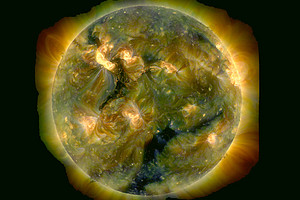 A star far away 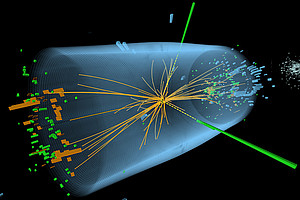 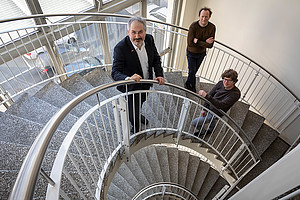