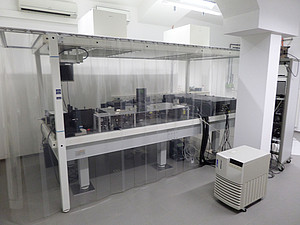 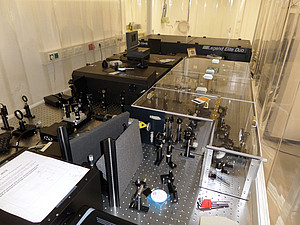 Sum Frequency Generation Spectroscopy (SFG),  in which two photons hv1 and hv2 of frequencies w1 and w2 generate one photon of sum frequency (w3=w1+w2), is one of second order nonlinear optical processes, which do not occur in media with inversion symmetry but take place only at the interface between those media where the inversion symmetry is necessarily broken. Briefly the SFG technique relies on the spatial and temporal overlap of two laser pulses. One of these is tunable in the IR, inducing coherence between vibrational levels, and the other one is in the VIS, inducing Raman transitions of the excited vibrational level to a virtual excited level that then relaxes to the fundamental state, releasing photons at the sum frequency. This technique allows the identification of the surface molecules, the determination of their molecular conformation and understands dynamics of energy transfer between: substrate-adsorbate, adsorbate –substrate or adsorbate –adsorbate at real time and can be used in different media such as solid/liquid, liquid/liquid and solid/gas interfaces (see Figure).

Indeed we use this technique to understand the structure and bonding at water –oxide (FeO, Fe3O4, and SiO2) interface. Since SFG is sensitive to molecular order of water at the interface, many parameters can play a role to monitor the structural response of water molecules at oxide-liquid interface, such as pH, electrical potential and chemical identity of adsorbates. Pump probe will be applied to understand the vibrational relaxation of adsorbates, and monitor vibrational energy flow between these species. 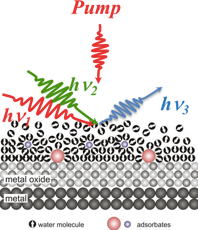 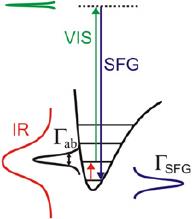 This SPECS UREELS System consists of two separately pumpable chambers: a preparation chamber with the standard surface science preparation and analysation methods (LEED, sputter ion gun, Ar-, O²-, CO- gas lines, Quartz micro balance, Quadrupole mass spectrometer, ...) which is pumped via a Turbomolecular Pump and a Combi Ion-Getter-Pump - Titan Sublimation Pump and a Spectrometer Chamber with the SPECS UREELS DELTA 0.5 Spectrometer which can be separately pumped by also a Combi Ion-Pump - Ti Sublimation Pump. Both chambers can also be pumped solely by the Combi Ion-Getter-Pumps. In addition a gas handling line with a dosing mechanism was installed to the system with direct access possibilities to the preparation chamber. The system also easily cooled down to liquid Nitrogen Temperature via a cooling rod in the manipulator device. 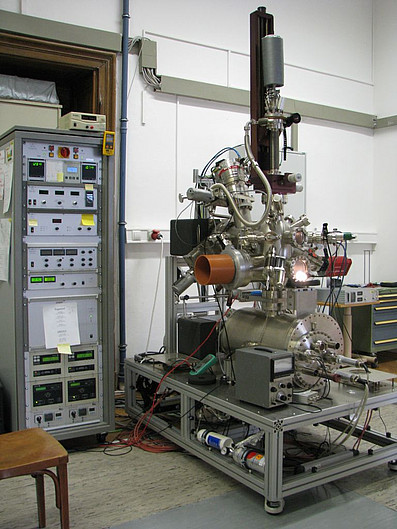 This system is currently under construction and will be available soon in our group. For more recent news check our News section for updates ...