Oxide structures with nanometric dimensions on well-defined metal surfaces have novel physical and chemical properties, whose exploitation will require controlled fabrication. The focus of this project is on the preparation of low-dimensional ternary oxide MWOx (M denotes a transition metal: Cu, Ni, Fe, Mn), or so-called tungstate nanostructures, and the subsequent characterization of their properties. Particular interest will be in the effects of the dimension, scale and chemical composition of the MWOx nanostructures on their structural, electronic and vibrational properties. For the preparation of the ternary oxide nanolayers a new fabrication approach will be employed, which involves a two-dimensional solid state reaction process of (WO3)3 cluster molecules, deposited from the gas phase, onto a well-ordered surface oxide MOx phase in ultrahigh vacuum. A major focus of the work will be to elucidate and control the physically relevant thermodynamic and kinetic parameters governing the solid state reaction process. The characterization of the structural, electronic and vibrational properties of the tungstate nanostructures will be performed in situ and with atomic precision using the full palette of modern surface science techniques. Density functional theory (DFT) calculations will be performed in the theory group of Prof. Alessandro Fortunelli in Pisa.

The proof of concept of the proposed preparation approach has been achieved recently by our work on tungsten oxide growth on copper surfaces. We have found that when (WO3)3 molecules, formed by vacuum sublimation of WO3 powder at 900-1000°C, are deposited on a (2x1)-O-Cu(110) reconstructed surface they react and form a wetting monolayer with a well-ordered structure [1]. The latter has been resolved by high-resolution STM imaging (Fig. 1a). The chemical nature of this novel 2-D W-O-Cu layer has been investigated by high-resolution XPS core level spectroscopy, NEXAFS, and valence band spectra. The DFT calculations have suggested a structure model with a formal CuWO4 stoichiometry for this 2-D phase (Fig. 1b), consisting of 3 sublayers in a Cu-O-W-CuO sequence, containing topological elements of wolframite and scheelite structures. 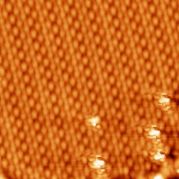