Coronal holes and their relation to the solar wind 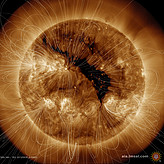 The solar wind is a stream of charged particles (protons, electrons, Helium ions) that is constantly emanating from the Sun with typical speeds around 400 km/s. High-speed solar wind streams (HSSs), originating from coronal holes on the Sun, may reach speeds up to 800 km/s. Coronal holes are associated with rapidly expanding "open" magnetic fields along which the solar wind flow can easily escape. They appear as dark regions in solar extreme ultraviolet (EUV) and X-ray images due to the lower density and temperature compared to the surrounding corona. Studying coronal holes and their associated HSSs is an important task, since in combination with the Sun's rotation they shape the solar wind distribution in interplanetary space and are the dominant contribution to space weather disturbances at times of quiet solar activity, due to recurrent geomagnetic storm activity.

The goal of our research work is to provide a better understanding of the spatial and temporal distribution of the solar wind flow in interplanetary space. Based on an empirical relation we develop methods to forecast the solar wind flow at the distance of Earth. To this aim, we extract the areas of coronal holes and their magnetic characteristics from remote sensing EUV imagery and relate these parameters to in-situ measurements of the solar wind parameters at 1 AU. The method is applied to almost real-time EUV images recorded by the Atmospheric Imaging Assembly (AIA) onboard NASA's Solar Dynamics Observatory (SDO) to provide solar wind forecasts up to four days in advance. These results are relevant for predicting recurrent geomagnetic storm activity caused by HSS and for improving models on the interplanetary propagation of coronal mass ejections.